One morning last week I took a walk alone out on the pier. It’s one of my favorite things to do, one of those things I don’t do nearly often enough.

I love walking out over the ocean, hearing the waves swell underneath my feet, feeling the pier shift ever so slightly as the water crashes and rushes towards the shore.

As I was meandering past the sinks which are placed along the railings for fishermen, something stopped me. Under the curve of one of the faucets huddled a group of pigeons. Like most pigeons, they were nervously bobbing and bouncing about; however, this group was straining their beaks towards the faucet itself. Peering closer, I noticed that ever so slowly, drops of water were forming on the rim of the stainless steel, and the frantic fowl were pushing and shoving, vying for the chance to peck at the liquid beads.

It was brief second of observation and I moved on, amused. However, in the next few moments, God began to speak to me.

(That would be my classic, oh-so-spiritual response when God begins to speak. He’s so gracious.)

They are just like my people. They are desperate for a drink, waiting underneath a closed faucet, stretching with frenzied energy for a tiny droplet. They’re convinced this is all I have to offer, this is all they will be given.

I began to chew on this, to ruminate.

Those poor pigeons stood underneath a closed spigot, surviving on the tiny rivulets which were mere leftovers from a previous rush of water. They pushed and pecked, hoping to force their way into the right place at the right time to receive that precious, life-giving liquid. Surviving on scraps.

And yet, Ephesians 1:3 declares,

“Blessed be the God and Father of our Lord Jesus Christ, who has blessed us in Christ with every spiritual blessing in the heavenly places…”

Isaiah boldly speaks the words of the Father in chapter 55,

“Come, everyone who thirsts, come to the waters; and he who has not money, come, buy and eat!”

“If anyone thirsts, let him come to me and drink. Whoever believes in me, as the Scripture has said, ‘Out of his heart will flow rivers of living water.’ Now he said this about the Spirit, whom those who believed in him were to receive…”

As I neared the end of the pier, I realized the pitiable state in which we so often choose to exist. The Father has offered us rivers, gushing, glorious rivers streaming with water which is alive. He has declared to us that these things are ours, they are our inheritance, our gifts from our loving God. His power, His presence, His glory, His joy, His wisdom, the list is inexhaustible: “…EVERY spiritual blessing…”

And yet, like the dwarves in C.S. Lewis’ The Last Battle, we can’t and won’t see.

We won’t receive the glory of what is being given, and we subsist instead on drips from a dirty, grungy faucet, one that stinks of fish guts and hasn’t been sanitized in months.

We’re spiritually dehydrated, disillusioned and disappointed, not realizing that there is SO MUCH MORE. 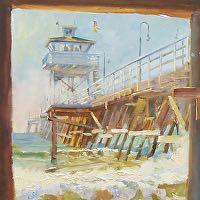 My heart began to ache, and my soul began to cry out to the living God, the source of our living water… that we would see, that we would know, but most importantly, that we would LIVE in the never-ending stream of ALIVENESS that is Him.

I made my way home down the beach trail, soaking my feet in the briny water, soaking in the beauty of revelation.