It’s time for the Yuletide tree to come down.

A few nights ago I stood next to our well-lit pine in the wee hours, peering out the window into a genuine winter storm. For those of us residing in Southern California, the mere anticipation of a blustery-grey fifty-five degree day can admittedly scatter us to the recesses of our closets, hunting determinedly for that one sweater we purchased last year on clearance. Just in case. But a freezing-point night, replete with hungry winds and an unending torrent of water pouring from the thick blackness… well, that’s enough for this enormous populace of sun-seekers to completely batten down the proverbial hatches.

That night, mine were fixed tight.

As I squinted through the darkness, just making out the wild dance of neighborhood trees bowing in the gale, I sighed with relief. All family members accounted for, and the cupboards were filled with enough provisions to keep us from the necessity of a thorough soaking as we drove the mile’s journey to the nearest market. Life was good.

But the longer I remained on watch, the more unsettled I became. Thoughts began to creep into my consciousness which, at first, were unwelcome intruders. My heart was pricked. I had a flash of remembrance: a vision of the woman I had driven past earlier that day, the one who had shuffled behind a cart loaded with her few worldly possessions.  My toes wiggled in the slight draft, uncomfortably chilled.

Where was she, that nameless wanderer?

The trickle of thoughts became a flood. Face after unknown face commanded my attention, rousing me to observe far more than the howling just outside the glass panes. The elderly veteran with wizened eyes who frequented the neighborhood convenience store. The hardened invalid wearing a prosthetic leg who limped the local sidewalks. The desperate mother clutching a frayed cardboard sign who waited at a nearby intersection. Where were they on this drenched, frigid evening when all the world seemed shut impenetrable to bleak need?

And like the flash of electric light which illuminated that sky, I was overwhelmed by a image of steaming footsteps in the snow.

A giant of a man, forcing his way through bitter blast, bearing a fragrant cup of good will and human kindness. Blazing torch held aloft, he lights the way for the stumbling servant who follows in his stead. Seeking the needy, they press on through the bleak swirl of ice at great personal cost. The legend lives on far beyond the mere years of the man.  Good King Wenceslas. 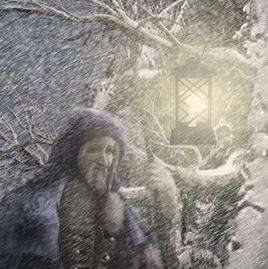 Immortalized in Christmas song, the Duke of Bohemia, Vaclav I, was dubbed by his countrymen as the Beneficent Monarch Wenceslas after his death. Over the ensuing 1,000 years, minstrels of every era have sung of his devoted determination to serve the poor, even to the point of substantially narrowing the contents of his personal larder and countinghouse in order to bring relief to the suffering. The kind of man that makes a legend.

There was I, the staggering page, compelled by love for my great Master to venture forth into the bitter, the hard, the frigid weather. Clutching the bread and the wine, I hear but one command: follow in My footsteps.

The one who shivers uncontrollably in the cold, I’ve noted him. Tell me, dear one: who is he and where does he dwell? Surely you know, for I’ve made it your sole objective to be My eyes and ears. We must this night bring him relief; we must gift him the warmth of hope. Follow the light inextinguishable which I bear. Plant your feet in My path. The heat of My presence will rouse and strengthen you. Press on. We shall not fail.

My good and great King was calling. It was time to move past the cherished season of Advent. Time to move into a soul’s celebration of the Feast of Saint Stephen, that first martyr of the faith, the first to follow in the footsteps of his Lord. Eagerly relinquishing his last breath, he boldly proclaimed the truth: the King has come! He has already arrived, and in His train follows every needful thing. Hope for the hurting; love for the lonely. Friendship and kindness for the abused. Sustenance and shelter for the needy. Warmth for those who have been frozen hard by life’s mid-winter storms. 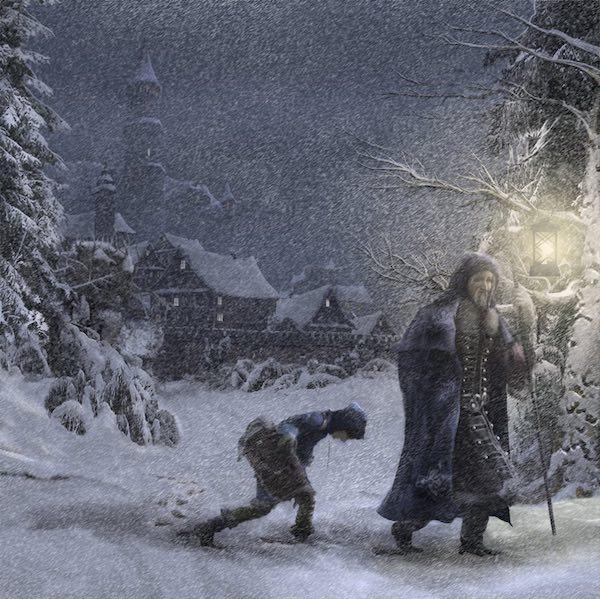 And the King calls loud to those who have ears to hear: Follow Me! Out into the howl of darkness, hunt with me. Embrace the one who cries in fear of utter abandonment. Wrap him with My robe of sonship. Feed him with the redemption of My flesh and blood. Let My light illuminate his darkness. At great personal cost I have made provision for him. Go now and bring him home.

My heart flamed with the call. My spirit resounded with one response. Here I am, Lord. Send Me.

And as 2015 opens wide its doors, I am eager to go forth, bearing the gifts of the Christ-child, the King of all Kings.